JAM Group Co. as a major producer, supplier and exporter of several petrochemical products in the Middle East, is located in Iran. JAM Group Co. is highly experienced in exporting and is active in case of Liquefied Petroleum Gas (LPG) supplying.

Iran as a prominent name in oil and gas industries, has been producing Liquefied Petroleum Gas (LPG) in its enormous and well-equipped petrochemical complexes and has undeniable ability in case of supplying this product for exporting.

LPG – Liquefied Petroleum Gas is a definition of gases produced by wet gas or raw oil. The LPG gases are taken out of the raw oil during refining, or from natural gas separation. LPG gases are defined as propane, butane and a mixture of these. Large atmospheric pressure gas carriers carry most of the LPG transported at sea. However, some LPG is transported with intermediate pressure gas carriers. Fully pressurized gas carriers mainly handle coastal trade.

LPG can be cooled with water, and most LPG carriers have direct cargo cooling plants that condenses the gas against water.

The sea transport of LPG is mainly from The Persian Gulf to Japan and Korea. It is also from the north- west Europe to USA, and from the western Mediterranean to USA and Northwest Europe.

LPG is utilized for energy purposes and in petrochemical industry.

The Chemistry of LPG

In a like manner, four carbon atoms bonded to 10 hydrogen atoms forms butane:

There are two possible configurations for the butane molecule.

The above arrangement consists of a straight C-chain and is called normal butane or n-butane. If the C-chain is branched, it is called iso-butane. Such a re-arrangement of the atoms is known as isomerization and has no significant effect on the fuel properties.

The density of LPG is defined as its mass per unit volume (kg/l) at a given temperature. LPG liquid has a density of about 0,54 kg/l at 15⁰C and is therefore lighter than water.

It varies slightly with LPG composition and every batch of LPG produced at a refinery will have a specified density at a given temperature. LPG liquid is fairly light – about half the weight of water. To convert liters of LPG to kilograms, simply multiply the number of liters by the density.

LPG vapour has a density of about 1,9 times that of air and is therefore heavier than air. This is important when considering ventilation requirements and has an influence on the design of burners and certain meters for measuring vapour flow.

Buildings used for storing LPG cylinders must have adequate floor level ventilation; in the event of a leak, the vapour being heavier than air will flow along the ground to the lowest level

and remain there for a considerable period of time, and can be an explosion hazard.

All substances which burn generate energy in the form of heat, which varies in quantity with the nature of the substance. The total amount of heat liberated by burning a substance is known as its Calorific Value or CV. It is usually expressed in megajoules per kg (MJ/kg). For LPG, it is 49,6 MJ/kg.

The thermal rate of expansion of liquid LPG is about 10 times that of water and since liquids cannot be compressed, it is probably the most important property of LPG affecting the way the gas is stored, handled and filled. Storage tanks and portable cylinders filled to allow for an ullage space in the vessel and cylinders must never be filled to more than about 85% of the internal volume.

When the valve of an LPG is opened, the pressure inside the cylinder is reduced and the liquid starts to vaporise (boil) at lower pressure. This vaporisation of the gas causes cooling to occur and the temperature of the gas will decrease. If the gas off-take rate is too high, the gas temperature will decrease to below 0⁰C and ice will start to form on the lower outside wall of the cylinder. Because LPG contains propane and butane, with boiling points of –42,1⁰C and – 0,5⁰C respectively, the mixture begins to separate – propane continues to boil off while the butane remains in liquid form at temperatures below its boiling point of –0,5⁰C. To avoid this situation, vaporiser units are used for LPG or pure propane can be used instead of Handigas (butane/propane mixture). It should be noted that low winter temperatures will aggravate this situation.

One liter of liquid Handigas will rapidly and totally vaporise when exposed to atmospheric pressure (100 kPa) to form about 275 liters of vapour at 15⁰C. In a closed cylinder containing some liquid Handigas, a relatively small quantity will vaporise in the restricted volume of the cylinder, to produce a cylinder pressure of about 250 kPa at 0⁰C. This closed cylinder pressure is equal to the vapour pressure, and it increases dramatically with temperature to 500 kPa at 20⁰C and 1 550 kPa at 60⁰C.

A liquid leak is far more serious than a gas leak due to the high volume of gas formed. This is why cylinders must always be stored, transported and used in the upright position. In air a gas leak will form a highly flammable mixture of about 10 000 liters from one liter of liquid gas. As LPG consists of a mixture of propane and butane and since propane has a much higher vapour pressure than butane, the vapour pressure in a cylinder containing mostly propane will be much higher than that of a cylinder containing mostly butane. This relationship between pressure and

temperature of pure propane and butane, and LPG (60:40 mix) is illustrated below.

Natural gas processing begins at the wellhead. The composition of the raw natural gas extracted from producing wells depends on the type, depth, and location of the underground deposits and the geology of the area. The natural gas produced from oil wells is generally classified as “associated-dissolved,” meaning that the natural gas is associated with or dissolved in crude oil. Natural gas production without any association with crude oil is classified as “non-associated.” About 60% of the world supply of LPG comes from associated gas processing, and 40% of the LPG is produced in oil refineries from crude distillation, fluid catalytic cracking units, hydrocrackers, etc.

There are 4 columns used in the conventional process. First stage of LPG extraction from NGL is DeEthanizer. In the DeEthanizer column, methane and ethane are expected to be separated and flow through the top of the column. Since there is no requirement to liquefy methane and ethane, especially in small amounts, these components will be kept in vapor phase and additional condenser is unnecessary.

In this DeEthanizer, 100% methane and ethane in mixed feed can be separated and leaves the top of the column. This product will be used internally as a fuel to generate the steam which is used for reboiler of the column. Heat is supplied to the column by forced circulation using reboiler pump to reboiler and into the column. The heavier hydrocarbons other than ethane leave the column as bottom product in a liquid phase. Next it is sent to DeButanizer column.

DeButanizer is used instead of DePropanizer because the bottom product of DeEthanizer composed of small amount of propane (2 % of mass fraction) and butane (5 % of mass fraction). So that smaller columns will be used for next extraction. This is for economic reason and the efficiency of the separation as it is easier to extract the product this way and less duty will be required for reboiler.

Before entering DeButanizer column, the DeEthanizer bottom product is expanded from 26 – 17 bar and fed into DeButanizer as mixed-phase feed. This feed is fractionated into mixed propane and butane as overhead product and heavier hydrocarbons (C5+) as bottom product. Then the overhead product is totally condensed in the condenser by heat exchange with cooling water, and condensate is collected in reflux drum. The reflux drum should be used in order to prevent cavitation on the pump due to vapor phase. The DeButanizer reflux and product pump serve the dual purpose of supplying reflux to the column and allowing withdrawal of column overhead product butane from the reflux drum. The column heat is supplied by a reboiler and circulation is aided by DeButanizer reboiler circulating pump.

About 100% propane and 99% butane can be recovered from the feed at the overhead column product. This stream leaves the column and is sent to DePropanizer column to separate propane and butane. Meanwhile, the bottom product composed of pentane and heavier hydrocarbons will be stored as natural gasoline. Since the bottom product has high temperature (> 200⁰C), it will be cooled by heat exchanger before being sent to the storage. 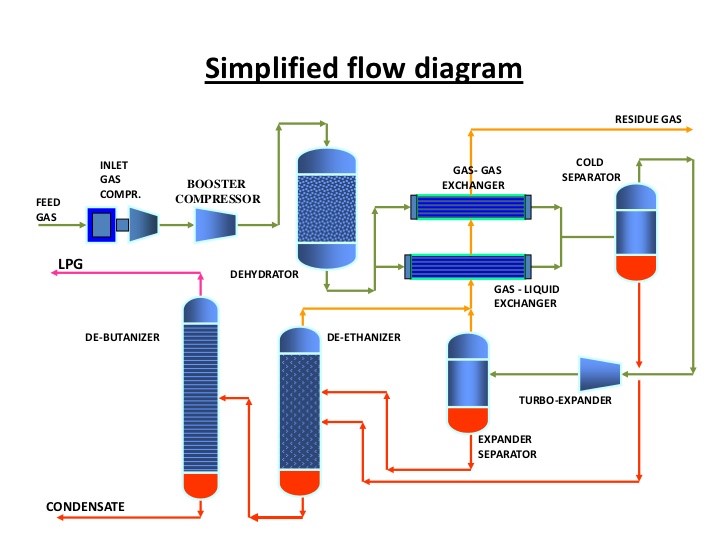 The field grade butane is expanded from 10 – 5 bar before enter the butane splitter. i-butane is recovered as overhead product and n-butane as bottom product. I-butane is totally condensed by condenser. Condensate is collected in reflux drum. A part of the condensed overhead product is sent back to the column as reflux via pump while the remaining part is withdrawn as a liquid i-butane product. Butane splitter heat is supplied by reboiler. Reboiler circulation is aided by reboiler circulation pump. Butane splitter column separates 96% mole of i-butane in the overhead product and 96% mole of n-butane in the bottom product. Both products have higher price than field grade butane.

Application of LPG varies from food to transport industry. Its consumption depends on the local

The manufacture of glass / ceramic products is complicated by numerous chemical reactions which occur during the process. The use of a clean fuel like LPG enhances the product quality thereby reducing technical problems related to the manufacturing activity. LPG being a gaseous fuel gets easily regulated and complements the heating process.

LPG being a premium gaseous fuel makes it ideal for usage in the Cement manufacturing process. The ease in regulation and soft quality of the LPG flame and low sulphur content are the key advantages both with regard to cement quality and kiln operability.

The metal industry is indeed one of the most important consumers of energy. LPG being a far superior fuel as compared to the other heavy fuels helps improve the cost of operation and strikes

an economic balance between fuel price and quality of the end product. The application is basically for cutting, heating and melting. Both ferrous and non-ferrous metals are frequently cast

into shapes by melting and injection or pouring into suitable patterns and moulds. LPG in this case is an ideal fuel for meeting the requirement of temperature regulation and desired quality.

LPG is the ideal fuel for production of food by agriculture and animal husbandry. Drying of crops and other farm products requires clean and sulphur free fuel for drying activity to avoid any transfer of bad taste or smell to the dried crops.

An aerosol formulation is a blend of an active ingredient with propellant, emulsifiers, perfumes, etc. LPG, being environment friendly, has replaced the ozone depleting CFC gases which were earlier used by the aerosol Industry.

Automotive LPG is a clean fuel with high octane, aptly suited for vehicles both in terms of emissions and cost of the fuel. The main advantage of using automotive LPG: it is free of lead, very low in sulphur, metals, aromatics and other contaminants. Unlike natural gas, LPG is not a Green House Gas. The following table lists the preferred LPG composition in Europe.

LPG is an ideal fuel for electricity & heat / electricity and comfort cooling. This finds varied applications in industries requiring power and steam, power and hot air. LPG is ideally suited for

LPG has lower calorific value then petrol, so it provides less miles per gallon, however in European countries LPG tax levels are much lower than both diesel and unleaded so it is still a far

more cost-effective way to run your car. The tax break is due to evidence that suggests that LPG

is better for the environment than the mainstream fuels.