JAM Group Co. is able to supply more than 8000 tons per year of Sulfite Products such as Sodium Sulfite, Sodium Metabisulfite and Catalyzed Sodium Sulfite in accordance with international standards.

Soluble silicates of alkali metals (sodium or potassium) were observed by European alchemists already in the 1500s.

What is sodium silicate ?

Silicate is  a generic name for chemical compounds with the formula Na2SiO3 or Na2O3Si  the anions are often polymeric. These compounds are generally colorless transparent solids or white powders, and soluble in water in various amounts. Sodium silicates are stable in neutral and alkaline solutions. In acidic solutions, the silicate ions react with hydrogen ions to form silicic acids, which tend to decompose into hydrated silicon dioxide gel. Heated to drive off the water, the result is a hard translucent substance called silica gel, widely used as a desiccant. It can withstand temperatures up to 1100°C Sodium silicate is also the technical and common name for a mixture of such compounds, chiefly the metasilicate, also called waterglass, water glass, or liquid glass.  Sodium silicate appears as a powdered or flaked solid substance. 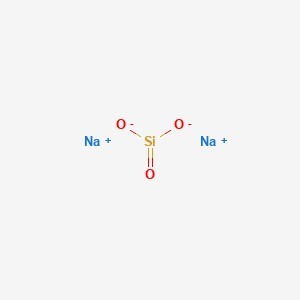 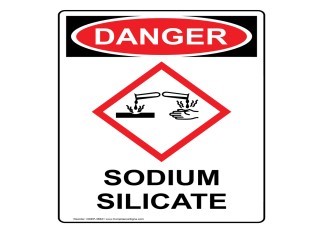 Sodium silicate glass composition can be designated as: Na2 O • (SiO2)x – where x is the ratio of the components and falls in the practical range from 0.4 to 4.0.

Different grades of the product

In industry, the various grades of sodium silicate are characterized by their SiO2:Na2O weight ratio (which can be converted to molar ratio by multiplication with 1.032). The ratio can vary between 1:2 and 3.75:1. Grades with ratio below 2.85:1 are termed alkaline. Those with a higher SiO2:Na2O ratio are described as neutral.

Sodium silicate has been manufactured since the 19th century, and the basic principles of making “silicate of soda” have not changed since that time. It is commonly produced by roasting various quantities of soda ash (sodium carbonate, Na2CO3) and silica sand

This roasting produces fused glassy lumps called cullet, which can be cooled and sold in that form or ground up and sold as powders. Lump or ground water glass in turn can be fed into pressurized reactors for dissolving in hot water. The solution is cooled to a viscous liquid and sold in containers ranging in size from small jars to large drums or tanks

In either production route, the higher the ratio of SiO2 to Na2O and the higher the concentration of both ingredients, the more viscous the solution. Viscosity is a product of the formation of silicate polymers, the silicon (Si) and oxygen (O) atoms being linked by covalent bonds into large negatively charged chain or ring structures that incorporate the positively charged sodium ions as well as water molecules. Highly viscous solutions can be spray-dried to form glasslike beads of hydrated sodium silicate. The beads can be packaged for sale to commercial users much like ground cullet, but they dissolve more readily than the anhydrous form of water glass. 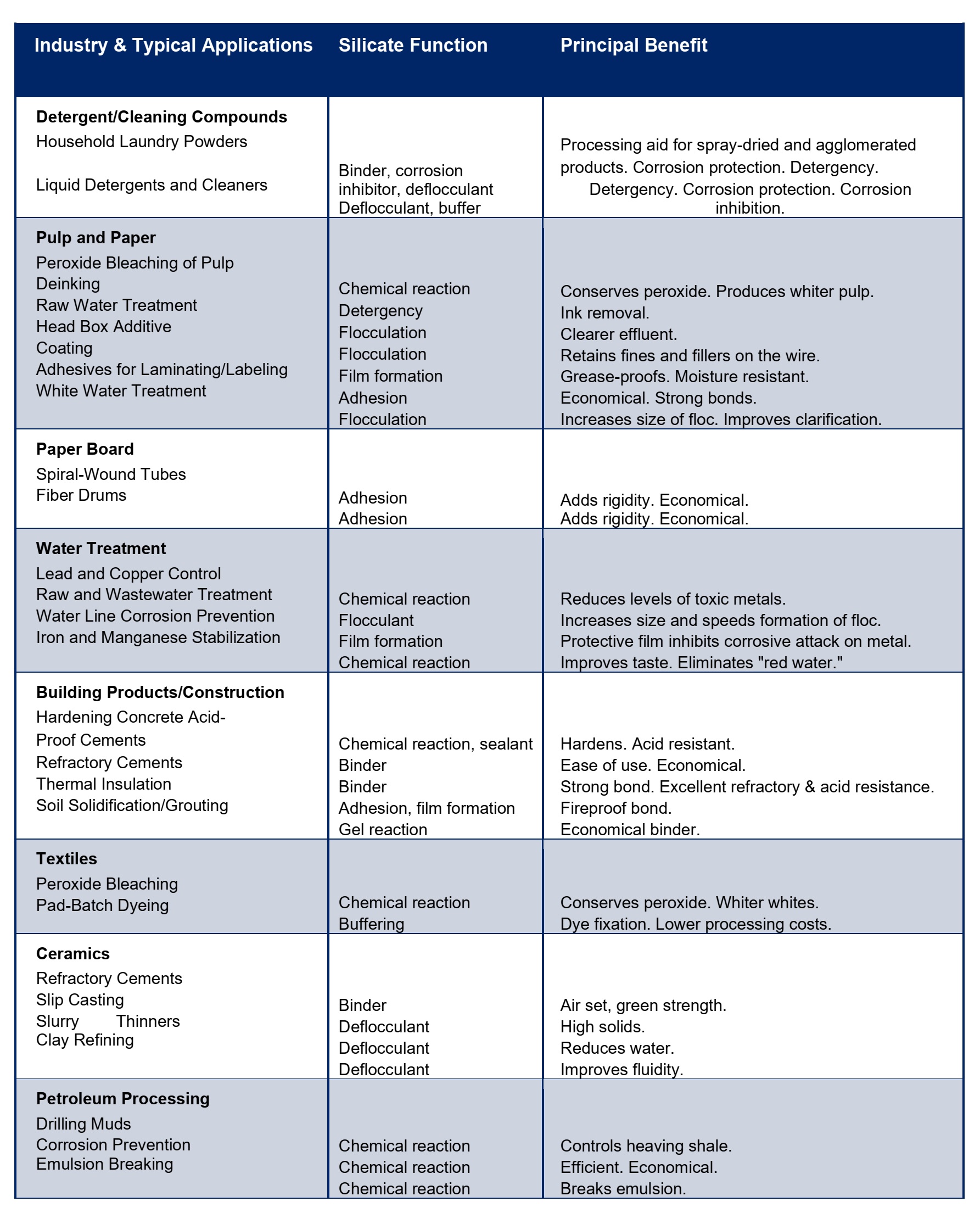 Deflocculating silicates help break up inorganic or particulate soils into fine particles, making them easier to remove from surfaces and easier to suspend in solutions.

Sodium silicate is frequently used in drilling fluids for stabilizing borehole walls and avoiding the collapse of bore walls. It is particularly functional when drill holes pass through argillaceous formations containing swelling clay minerals such as smectite or montmorillonite.

The use of sodium silicate solution in Concrete treatening could help to decrease porosity in most masonry products including concrete, stucco, and plasters. The consequence is in reducing water penetration, but has no known effect on reducing water vapor transmission and emission. A chemical reaction occurs with the excess Ca(OH)2 (portlandite) present in the concrete that permanently binds the silicates with the surface, making them much more durable and water repellent. This treatment commonly is used only when  the initial cure has occurred (7 days or more depending on conditions). These coatings are known as silicate mineral paint.

Sodium silicate is employed as an alum coagulant and an iron flocculants in wastewater treatment plants. Using Sodium silicate cause colloidal molecules blinds and leads to create  aggregates that sink to the bottom of the water column. The microscopic negatively charged particles suspended in water interact with sodium silicate.as a result of increasing of ionic strength caused by the addition of sodium silicate  Their electrical double layer collapses and they subsequently aggregate. This process is called coagulation.

It is utilized  as a sand binder in the process of  sand casting of iron or steel. It concede the rapid production of a strong mold, by passing CO2 through the mixture of sand and sodium silicate in the mold box, which hardens it almost immediately

Sodium silicate accompanying silicate, is used in muffler repair and fitting paste. dissolving in water, make both sodium silicate and magnesium to become as a form of a thick paste that is easy to apply. When the exhaust system of an internal combustion engine heats up to its operating temperature, the heat ejects all of the excess water from the paste.

The silicate compounds which  are left over have glass-like properties, making a temporary, brittle repair.

Sodium silicate another use is as an exhaust system joint and crack sealer for repairing mufflers, resonators, tailpipes, and other exhaust components, with and without fiberglass reinforcing tapes. In this application, , to make the sodium silicate “glued” joint opaque, the sodium silicate (60–70%) is generally mixed with kaolin (40-30%), an aluminum silicate mineral. The sodium silicate is the high-temperature adhesive; the kaolin serves simply as a compatible hightemperature coloring agent., though Some of these repair compounds also have glass fibers to enhance their gap-filling abilities and reduce brittleness.

Sodium silicate can be used to fill gaps within the head gasket. typically used on aluminum alloy cylinder heads, which are sensitive to thermally induced surface deflection. This can be caused by many things including head-bolt stretching, deficient coolant delivery, high cylinder head pressure, overheating, etc.

“Liquid glass” (sodium silicate) is added to the system through the radiator, and allowed to circulate. Sodium silicate is suspended in the coolant until it reaches the cylinder head. At 100– 105°C (212-221°F), sodium silicate loses water molecules to form a glass seal with a remelt temperature above 810°C (1,490°F).

A sodium silicate which is a temporary form of repairment can last two years or longer. The repair occurs rapidly, and symptoms disappear instantly. This repair works only when the sodium silicate reaches its “conversion” temperature at 100–105°C. Contamination of engine oil is a serious possibility in situations in which a coolant-to-oil leak is present. Sodium silicate (glass particulate) contamination of lubricants is detrimental to their function.

Sodium silicate solution is used to inexpensively, quickly, and permanently disable automobile engines. Running an engine with about 2 liters of a sodium silicate solution instead of motor oil causes the solution to precipitate, catastrophically damaging the engine’s bearings and pistons within a few minutes. In the United States, this procedure was used to comply with requirements of the Car Allowance Rebate System (CARS) program.

A mixture of sodium silicate and sawdust has been used in between the double skin of certain safes. This not only makes them more fire resistant, but also makes cutting them open with an oxyacetylene torch extremely difficult due to the smoke emitted.

When crystals of a number of metallic salts are dropped into a solution of water glass, simple or branching stalagmites of colored metal silicates are formed. This phenomenon has been used by manufacturers of toys and chemistry sets to provide instructive enjoyment to many generations of children from the early 20th century until now.

Sodium silicate is used as a deflocculate in casting slips helping reduce viscosity and the need for large amounts of water to liquidize the clay body. It is also used to create a crackle effect in pottery, usually wheel-thrown. A vase or bottle is thrown on the wheel, fairly narrow and with thick walls. Sodium silicate is brushed on a section of the piece. After 5 minutes, the wall of the piece is stretched outward with a rib or hand. The result is a wrinkled or cracked look.It is also the main agent in “magic water”, which is used when joining clay pieces, especially if the moisture level of the two differs.

Sodium silicate with additives was injected into the ground to harden it and thereby to prevent further leakage of highly radioactive water from the  nuclear power plant .

While not actually a medical use, sodium silicate, and other silicates, are the primary components in “instant” wrinkle remover creams, which temporarily tighten the skin to minimize the appearance of wrinkles & under-eye bags. These creams, when applied as a thin film and allowed to dry for a few minutes, can present dramatic results. Unfortunately, it is not permanent, lasts few minutes or couple of hours. It works like water cement, once the muscle starts to move, it cracks and leaves white residues on the skin.

Waterglass has been used as an egg preservative with large success, primarily when refrigeration is not available. Fresh-laid eggs are immersed in a solution of sodium silicate. After being immersed in the solution they were removed and allowed to dry. A permanent air tight coating remains on the eggs. If they are then stored in appropriate environment, the majority of bacteria which would otherwise cause them to spoil are kept out and their moisture is kept in. According to the cited source, treated eggs can be kept fresh using this method for up to five months. When boiling eggs so preserved, the shell is no longer permeable to air, and the egg will tend to crack unless a hole in the shell is made (e.g. with a pin) in order to allow steam to escape.

Sodium silicate gel is also used as a substrate for algal growth in aquaculture hatcheries.